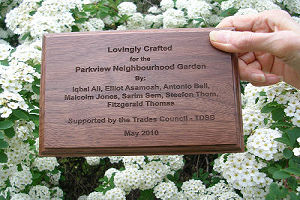 Vegetables, herbs and fruit grew well, so we determined that we needed a cart.  Building on a design created by a friend in Winnipeg, we adapted it to the size that would fit through our stable door. 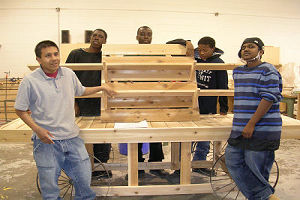 Having contacted the Trades Council of the Toronto District School B

oard, we found  interested staff and students who were eager to build the cart. This project proved to be a valuable lea

rning experience for these students. So Iqbal Ali, Eliot Asamoah, Antonio Bell, Malcolm Jones, Sarim Sem, Steefon Thom and Fitzgerald Thomas began work in March 2010 under the guidance of instructors Gilbert and Patrick. It was wonderful to watch the instructors’ pride as they guided their students in the construction of a sturdy cart which has since been put to good use. 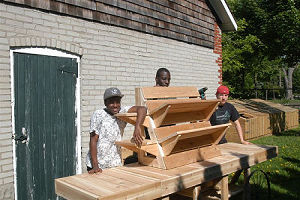 We celebrated their work when they arrived at the garden to install its various parts. Being healthy teenagers we knew we should feed them and so we did. We gave each a personal photo album showing the various stages of their work and some of our produce. Included as well were our words of thanks. We gave them a tour of the garden where they enjoyed seeing the stages of a blooming strawberry, learning the progression from pink flower to red berry. We introduced them to lemon balm and gave them springs for their albums. 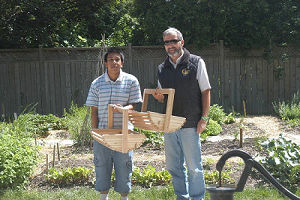