Gardening in the Desert

I watched my dad gardening, planting vegetables from seed, and growing flower plants.

You could say what’s so unusual about this? It was because he was gardening in a desert country called Qatar.

My parents came to Qatar in 1956 and lived and worked in the oilfield township of Dukhan.

Fresh vegetables, like everything else, were imported. Even portable water came by ferry from the nearby country of Bahrain. Eventually water was supplied from a ground aquifer with brackish water, and was treated and piped to the people of Dukhan.

My parents started gardening by digging a pit in the sand and filling it with dead leaves and other composting material, watering it and in a few weeks the desert heat had helped create compost. At first, the garden soil was prepared by mixing sand, sweet soil, sheep manure from the nearby abattoir, and compost, watering it until it became a nice medium for planting. Seeds were brought from India and grown in little boxes and then transplanted.

Soon my dad could grow a variety of vegetables from trying out all the different seeds he brought from India. He grew tomatoes, kohlrabi, beans, chillies, spinach, herbs, and many more.

He had a lovely collection of roses, bringing cuttings from India. 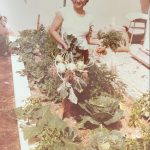 All this planting was done in September-October and harvested around April the following year. Temperatures varied from 38C after summer to 5C during cold winter nights. He would use hessian to provide shade from midday heat and sun. When I visited my parents on school holidays, I experienced the joys of gardening with my parents.

Eventually I married and continued my stay in Dukhan for another 30 years. When my parents retired in 1985 and left for India, I had the opportunity to collect some of their garden soil to start my own garden, adding compost and manure every year.

The oil company we worked for started encouraging the residents to grow trees in their backyards by giving out tree saplings and ‘sweet soil’ for free. And before you knew it, there was green foliage popping out of everyone’s garden walls.

By the mid 1980’s, the underground aquifer started running dry and so the company built a desalination plant with sea water and thereafter we had an endless supply of water for gardening. The next step taken by the company was to green the whole residential area of the oil township. Contractors planted lawns, trees, date palms, and flower gardens all along the sidewalks and children’s playgrounds. Dukhan looked like an oasis paradise in a desert.

As everyone became more aware of the environmental impact on natural resources, water conservation campaigns began and recycled water from the sewerage treatment plant was used to water the township gardens.

By the time I left Dukhan in 2014, it became an oasis getaway for city folks from all over Qatar.

Coming to Canada and seeing how easy it is to garden during the summer months has inspired me to keep going with my own little balcony garden and enjoy growing colourful flowers and ornamental plants. 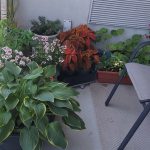 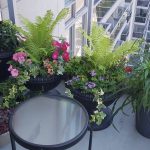